So, I won some manga from the 365 Days of Manga contest over at Suduvu.com so I thought I would actually review them for my blog. Word of warning, I asked from the strangest/weirdest stuff that Jason Thompson had so a lot of it is pretty "special". I received three volumes of Baron Gong Battle, and volumes of Central City, Orochi Blood, and Tokyo Zombie (which I already own, lols).  If you post an image of yourself with the manga you can get five more.  So here I am with the manga I won. 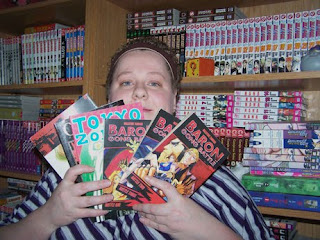 My first review is of the first three volumes of Baron Gong Battle. Now, I prefer to review series as a whole, but this is all I have so it will have to do. Thiss series has nine volumes total which it seems only the first six came out in English and it's been in limbo since 2005 or 2006. Though after after reading the first part I highly doubt that this title will take any interesting surprises to invalidate my review. 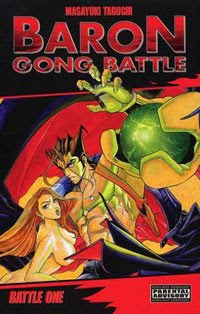 So I can basically sum this title up as simply terrible, I mean really terrible. Just about everything in it from the writing to the art is just a fucking travesty. Honestly, what this title has going for it is that it is so bad and so ridiculous. Did I mention the mangaka was the same guy who did the Battle Royale manga? (Yeah, that guy...) Honestly it's even hard to tell if the author knew it was so ludicrous. In some of the more comical moments it seems the author might have a clear understanding of the crazy exploitative crap that's being written and having fun with it. There are other moments that are told in such a deadpan manner, it is hard to imagine the author being anything but the utmost serious.

So, I am going to start with the art. The art is so offensive to the senses, that it would be the first thing anyone would notice about the title. Now I am pretty torn about the art so I need to talk about two different and distinct aspects of it, one the the drawing skill and two the character designs. 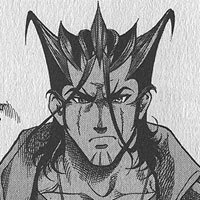 I cannot deny Taguchi can draw and draw pretty well at that. Everything has a lot of detail, in fact in some places it has a pretty absurd about of detail. Which I love, I really enjoy the sort of hyper realism you see in the works of Ryoichi Ikegami, who did the art for Crying Freeman, and Sanctuary. I can see some of that in Taguchi's work, high detail with screen tone done very effectively, a lot of cross hatching, and a fairly good design sense when it comes to panel placement. In fact if it wasn't for the fact everything collapses with the character design, I'd really like the art.

Ah, the character design... What a cluster fuck of terribleness. It's like Taguchi took everything in about terrible character design, and took it to heart as his style. I'm only going to talk the main character Baron Gong, otherwise this would never end.

It's like Taguchi thought "What could make this character as cool as possible? A scar! Well, if one is cool then five is totally bad ass. It would be even more cool if they were all on his face!"

The placements of the scars doesn't really make sense. They don't look like they were cause by fighting but placed on purpose. Which would mean that the Baron himself would have had to done it or at some point someone did it to him, either of those choices don't make any sense in the realm of the story. These scars are also never talked about either, they are just their for design effect. In this case the phrase less is more would have helped out a lot.

Then the hair, oh God the hair! Again this is an anime combo (to the max) of a whole bunch of things that might (keyword "might") be cool on their own and combining them into a travisty of a hairdo. Baron's hair looks like a cockroach who watched Dragon Ball Z hair and never left the 80's with a mullet. Taguchi, please pick just one! Don't combine them all into one über hairstyle! It's not cool, really! In the end every character ends up being so over the top on anime design tropes they just end up being really fucking ugly but not in some endearing way but grotesque way that leaves you with an uncomfortable feeling.

This causes another problem the background art with its hyper realism and the characters with outrageous anime character design cause a time distortion of reality giving readers cerebral hemorrhaging. Okay, maybe it won't cause your brain to bleed but it comes damn close to doing so. They just don't work together.

The story its self is a mess of the most exploitative exploitation film, and the most inexplicable, trope filled sci-fi story in existence. Our hero the Baron (Is he a Baron or is Baron his first name? ARGH! Brain hemorrhaging...) is after ancient monsters known as Neo Humes. Why are they called Neo Humes, you ask? The Baron came up with it himself, it is short for New Humans. (Yep, that's right...moving on now...) A female Neo Hume have been recently re-found and experimented on. Her children now want to take over they world as they need to eat regular old humans so they can sustain their molecular structure or some crap. They also can't have children they melt into piles of goop shortly after birth, but that doesn't stop the Neo Humes from trying really hard (and I mean really hard). 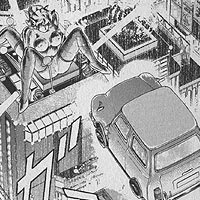 Baron gets involved in all this because one of the Neo Humes killed his girlfriend. After which there is an awesomely absurd scene of Baron and the head of his somehow still living girlfriend having a conversion just before she passes away. This all leads to the fact pretty much nothing in this manga makes a drop of sense when it comes to logic. Each of the story arcs are basically monster of the week crap. Why are these Neo Humes attacking Baron one at a time though? The story states there are something like 50 or so of them, why don't they attack all at once? Why didn't they just attack some where else in the world all at once and take it over and move out from there? They are super powerful beings, that easily could. Of course! They after Baron's DNA, why you ask? After having his arm ripped off he replaces it with the arm of a Neo Hume he killed. (Really, I do that every Tuesday.) So, some how his DNA must be compatible with theirs any maybe they could make non-goo pile babies with him.

For the three volumes I read things pretty much goes on like that. A monster shows up, Baron kicks its ass in some over the top super macho way. I couldn't stop reading it though. I just had to see what was the next completely fucked up thing would happen next. Such as a chase scene that had Baron launch a Mini Copper into an elevator to make it to the top of a sky scraper. So as much as I hated a lot of what makes up this manga it's so weird and exploitative I really did enjoy it. I can't say most people would like it, but if you enjoy more of the insane exploitative manga titles like Wounded Man this is worth a look though.

Final Verdict: Brain Explosion
Posted by Brand at 1:06 AM

Well this was a great review!!! you took a lot of time with it(hahahaha)or not!!!

I'm pretty sure this manga is just about action. bloody fights, nudity, out of this world action. Just like many action movies from hollywood things don't makes sense but the gore made up for it, or the explosions, or the car chase or the sex scene.

The fact that its in volume form the author made money so there must be enough readers who enjoys it... to an extent.

From reading your critic on the manga I would suggest not to buy a manga that is less than 10 volumes just because I am worried about your blood pressure. :D

I like the post format as you create user engagement in the complete article. It seems round up of all published posts. Thanks for gauging the informative posts.
cara menggugurkan kandungan
cara menggugurkan hamil

You managed to hit the nail upon the top and also defined out the whole thing without having side effect , people could take a signal. Will likely be back to get more. Thanks
Tangki Panel
Tangki Fiberglass
Jual Septic Tank

I thank you for the information and articles you provided