So Bad it's Good: Para Para

So, a couple of weeks back I was visiting a friend out on the West Coast.  This meant I had access not to just one Book Off but three.  Needless to say, I bought so much manga I had it mailed back to my house because it wouldn't come close to fitting in my luggage.

There were quite a number of books they had for a dollar at Book Off so I bought a bunch of them.  Because hey why not?  I'll take a stab at anything.  Oh, boy did I come with a treasure.  Para Para was released in 2001 by the now-defunct publisher ComicsOne.  They release some interesting stuff during their time including my beloved Bride of Deimos.

Para Para is a manhua (which are Chinese comics) this one is specifically Hong Kong which has its own comic scene which seems to be an interesting mix of east meets west.  They seem to be always in color with art that would be on the realistic end of manga styles. The author/artist Andy Seto seems to be a very popular creator on the scene having done Crouching Tiger, Hidden Dragon, and King of Fighters comics.  I'm guessing Para Para isn't one of his better works.

So what makes this one so bad it's good?
The story starts off with our heroine Yuki swimming in the school pool only to be yelled at she should be in class. She gets nasty with the guy and it turns out she is the school dean's daughter (I'm already feeling the cliche).  And she is totally good with using the position to get what she wants.  What a nice main character!


Next, we meet our hero Dennis.  Dennis hates the rain.

Yuki has a meeting with her Father who proves to also be an asshole. Guess it runs in the family. Turns out Yuki is really good at one thing, athletics (all of them apparently), but bad at book learning.  Her Father hates that more than anything of course and compares her to her dead sister and then slaps her.  Where we get some of the best dialogue ever.

Of course Yuki storms off.  Admittedly if my Father was that much of an asshole I would too. She then has a chance meeting (in the rain) with Dennis.  Where he thinks she is someone called Mary.  Also, I am not sure if he gets hit by a trolley car and stops it with his hand or not.  The art in this book...

Mary then meets up with her "friend" Ban. Ban is trying hard to get into her pants even though it is obvious she isn't interested and just using him because she must not have any acutal friends. At this is when she is introduced to the amazing world of Para Para. Which is a style of dance from Japan which during this early aughts was very popular with arcade machines.  This will be important.

At this club Yuki has a run in with a girl called Vodka (yes, really).  Vodka takes her Para Para really seriously and after hearing Yuki trash talk it challenges Yuki to a dance off (yes, really).

Of course it turns out Yuki is a natural at Para Para so Vodka has to keep upping the difficulty to the point where the arrows on the arcade machine disappear. (How did you think they were having a dance off?). In the end Yuki can't beat Vodka.  Which leads to a creepy scene where Ban's friend Fatty (yes, this character is called that through the whole book) goes from chill dude to super creeper because he was offered a date with whoever the loser of said contest was.  (Aren't these people just so nice?).  Which again of course Dennis comes in last minute saves Yuki from Fatty and challenges Vodka to a single round dance off.

Turns out Dennis is so awesome at Para Para he can unlock some super secret character that Vodka doesn't even know about. 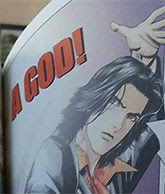 The dude is so good that he gets a crowd to follow him while he dances.  Which is when we get the amazing line from Yuki, "He's become their spiritual leader! At this moment he's become A GOD!"

Of course Dennis beats Vodka. Rhen we get a confusing scene where Vodka tells him she only came here for him even though a few pages  before she didn't know who he was.  Dennis also tells her "You know nothing about the true meaning of 'dance'." (This dialogue is fucking gold, people, fucking gold).

Also, I can't help but find it amazing that the dance god Dennis lights up a cigarette after this workout.

Yuki to weak after this dance off (guess her "athletics" didn't include endurance training) is swept off her feet by Dennis and carried to her limo waiting outside.

At some point I might wright a part two on this one.