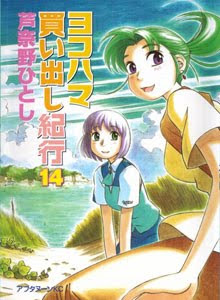 Yokohama Kaidashi Kikou (YKK) by Hitoshi Ashinano is a title that embodies the line “It's the end of the world as we know it and I feel fine.” The story takes place after some great disaster, the seas and risen, and much of the world is in decline. People just going on living like always, living a rather laid back pace of life. The main character is a robot named Alpha and she runs her owner’s seaside café. Where her owner is, no one knows. 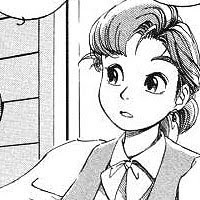 The story mainly revolves around Alpha and her adventures but sometimes it drifts off into stories about the side characters. It is hard to describe the plot of Yokohama Kaidashi Kikou because it is one of those slice of life titles that have no real strong ongoing story. It’s just the life of Alpha taking care of the café, visiting friends, and the stories of the supporting cast. A nice laid back life that seems really pleasant. As I read YKK I kept imagining what it would be like to go to Alpha’s café and enjoy a cup of tea.

If this sounds boring to you, then this title will be to you. Action is almost none existent, YKK makes Azumanga Daioh look like Crank: High Voltage. For me what really made this title overcome the slow pace is the really great atmosphere that drives it and the likable and nuanced characters. Every character was very distinct emotionally but outrageously or in your face. 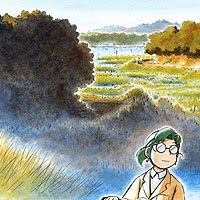 I enjoyed the art in the series it, but I wasn’t in loved with it. It has a really warm quality, the backgrounds are very well drawn, and it works well in context with the story. It is just that I wouldn’t run out and get an art book for it and I LOVE art books. I think the layouts are great, though. The panels are fairly simple but the contents inside each panel is composed incredible well. Many of the panels would make a nice framed piece of art on their own.

I enjoyed this title a lot it has a very dreamy quality that is hard to quantify. If you enjoy then slice of life genre this is a must read. If you think slice of life is boring as fuck, run as far away and as fast as you can get from this.
Posted by Brand at 8:17 PM No comments: 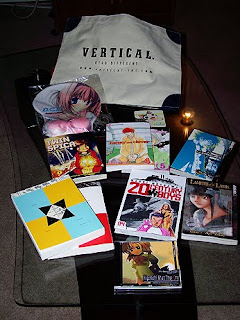 Going to cons always messes up my schedule (and my eating habits) for sometime before and after the con. I'll get back to the real content soon, I kind of promise. So, I was at Otakon, this past weekend. I can't say it was too exciting, only once in the time I have been going (10+ years) that there has been a guest I wanted to see (Kouta Hirano), so I mainly go just to hang out. The problem being is most of my friends moved to the west coast this year so there was only 3 of us in our group. We had a really good time though. I got to hang out with some of my other “peeps” I know on-line which was awesome.

I love going to cons for the shopping. I think one can kind of take it for granted today just how easy it is to get anime/manga materials today. Not just in the arr I'm a pirate way either, but getting actual goods is so much easier today. It used to be if you wanted the really awesome stuff, you had to go to a con to get it. Now you can order so much stuff on-line the dealers room isn't as big of a deal. I have to say though there is nothing like instant gratification. I like going through stacks of art books finding one so awesome I didn't even know I had to have, but I have to now! Sadly, this year I was pretty cash strapped at the con, so I didn't get much, but I did get some good stuff.

Before the con I talked to on of my on-line friends who hit up a used book store in her area. She picked up these for me there (at three bucks a piece!):

A little out of order but the deals were to good to pass up really and they are all in great shape. It was also awesome to meet one of my on-line friends. She bought 56 volumes of manga at the con! I dream I can do that some day! I think my best was in the 20-30 range.

At the con I picked up:

Though when I got home I realized I didn't have Black Jack 10. It is not a huge deal, as Black Jack has no real reading order. It's just the were on sale for ten bucks each! That is a six or seven dollar savings! Because I bought thirty bucks worth of stuff from Vertical, they give me a really pimp bag.

The only other think I got was the Higurashi visual novel from MangaGamer (and a free boob mouse pad lol).

Probably my smallest haul from a con ever but some good quality stuff.

I sat in on the Vertical panel. They have some more surprised Tezuka stuff coming and are looking to get more stuff from the '49s out there (which would be so awesome).

During Q&A someone asked about Go Nagai, in which Ed Chavez confirmed that they would like to release some of his titles but Dynamic Pro wants them to start with Maou Dante and they feel that is to much of a risk to sink capitol into, but maybe someday. I still need to review that one (but it means I have to read it again, lol) but I can understand where Ed is coming from on that one.
I will work on a real post of next time!
Posted by Brand at 8:25 PM No comments: