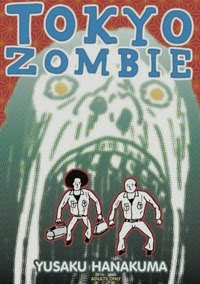 Now, it is time for the last review for my first batch of manga winnings from the 365 Days of Manga contest. This is a title I already owned called Tokyo Zombie. Since I already own this, you can take that as a good indicator that I like it, and I do! Out of titles I have reviewed so far from the contest I think by far this is the strangest of them. Tokyo Zombie is a single volume story by Yusaku Hanakuma, that is both wacky and oddly thought provoking.

The plot is very much molded after classic zombie movie tropes. This isn't really a bad thing, you never really get the unexpected, but what you do get though is very fulfilling. What sets this title apart from other zombie stories is the basic premise. The source of the zombies in this tale is a mountain of trash known as “Dark Fuji”. At first people are just dumping old trash can't get rid of else where (Japan has some pretty strict rules on how, when, and what kinds of trash can be thrown out.) Eventually, corpses start to get dumped here. Sometimes people even get buried alive. In a rather funny and disturbing scene a young couple bury the husband's nagging mother alive. Only for the wife to kick the decrepit woman's still complaining head off like a soccer ball. Dark Fuji is like scab covering a festering wound before it pops. Once popped, the dead rise from Dark Fuji and run rampant in Japan. 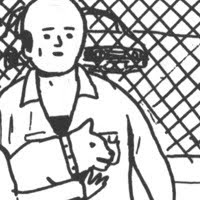 This is a really over the top title, it knows it, and just rolls with it. I've watched and read a decent amount of Zombie movies and comics, so I can' help but see some parallels from other titles. What is interesting though is Tokyo Zombie is originally from 1999, which predates the two movies I would strongly compare it to. It is a zombie comedy like Shaun of the Dead, and has elements seen in Land of the Dead, but Tokyo Zombie came before both of those titles! So, I have to give credit there is a lot of creativity in this title.

Also, like any good zombie movie Tokyo Zombie is more then what it seems. It contains a lot of social commentary within. Such as burying people in Dark Fuji like old trash that is in the way. In the first chapter there are several scenes that present problems going on in modern Japanese society. In one street punks are accosting an old man. In another there is a very odd presentation of a group having casual sex, where several men have sex with a school girl laying limp like a blow up doll. There is also a part where some cruel guards are “pig surfing” which could be representative of people living well of the backs of the lower classes...at least I think so. One of the last lines in the book is “It probably ain't just Japan that's got a Dark Fuji” a really obvious statement that every society and culture has problems. Over all this title is really oddly symbolic about the ills of modern society. It does all these undertones well and is never in your face about it. 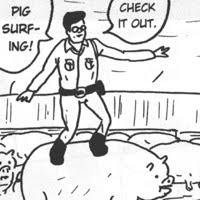 The art in Tokyo Zombie is pretty bizarre also. It looks like it was done in ball point pen (it may have in fact have been). It seems like something that would have been done by that strange guy everyone knew in high school who drew messed up crap while bored in class. There is a nice dichotomy between the art being rough and the panel layout being rather simplistic. In fact, many of the pages use the same handful of panel layouts over and over again. It works to make this rough art style be told more clearly. The art is both silly and gritty at the same time and it adds a strange, and odd discomfort to the title. To me this art style works much better, in the context of Tokyo Zombie, then any of the “normal” manga/anime styles. The more typical style would have seemed really out of place.

Over all Tokyo Zombie is a great fun title. If you are looking for an alternative manga I highly recommend this title. I think it is a great example of alternative comics and is far more approachable then many. On a similar note if you like zombie stories and are looking for something fun and wacky but still a great example of the genre this is a great read. I do think this title stands well on it's own and is worth a read by everyone, but I understand not everyone will like it.