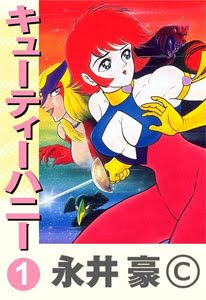 Continuing on the Go Nagai theme I figured I would talk about Cutie Honey (sometimes spelled Cutey Honey) this week. Now, I love Cutie Honey my first look into the series was the OVA Re: Cutie Honey. I really love this anime and have gone on to watch some of the 70’s series, some of the 90’s OVA and TV series, the live-action movie, and the live action TV show. I’ve enjoyed each in their own way (Ok the 90’s OVA is kind of boring) but I still really like Re: Cutie Honey the best out of all of them. Though, with so many adaptations I was really interesting in seeing the source material that has spun off so much entertainment. When the Cutie Honey manga finally got a fan translation, I was very excited. Sadly, I was left a bit disappointed.

The original manga seems like it can’t make up its mind if it wants to be a full on parody or not. Honey goes to an all girls school where the teachers are creepy looking, mean, and lesbians who are hot for their students. The students don’t fare much better. Some of the girls look like they beat the ugly into the ugly stick. One even looks like a hulking man. Ideally this would be hilarious given the trope of the girl’s school with all the pretty girls who are evil conniving bitches. Here they are all ugly, delinquent, bitches. Just hilarious...oh wait no...it's not at all, not at all. Moving on… 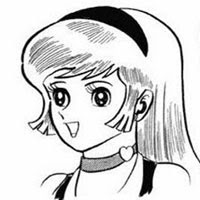 The main story element seen in all the adaptions is Honey’s father is a scientist who is murdered by a mysterious organization known as Panther Claw. It also turns out Honey is an android and can change into different forms for fighting. Now she is out to get Panther Claw who are creating all sorts of havoc.

I did like in manga she only had several forms, over the years it’s just come down to Honey can change into pretty much anything. We also meet a few of the re-occurring characters in the series like her friend Aki, sometimes love interest Seiji, and a few others. It was interesting to see that in this version Honey needs a lot of help from her friends to fight off Panther Claw. In some ways I like this but it also makes here seem so much less of a strong female character. Which is what I liked about Honey so much. 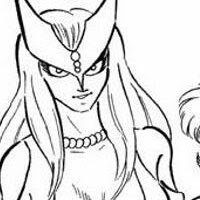 My main complaint of the is with the evil group Panther Claw. They are evil for evil’s sake and I’m fine with that but they just seem so stupid. They killed Honey’s father and want Honey herself because she has a device (which has a different name for every translation out there) that can turn air into pretty much anything. So what do they want to do with it? Make diamonds…yeah really. I know they are a group of female criminals. but that is so lame. At the level of over the top this manga has you need bigger goals. Also, as with villains who want to make tons of gold all you do is make it worthless and destroy the world economy. Now, if destroying the world economy was the goal, or to make an über death ray, I could get behind it. The, I just want to make diamonds and that is why I am doing horrible things and murdering people, just isn’t reason enough for me. Now, even though this manga is full over violence and titties it was done for young boys so I can be a bit forgiving but I don’t think it would have taken much more to make the villains’ reasons less dumb.

I was also disappointed with the art and panel layouts. I thought the art wasn’t the same quality as Devilman which was a year earlier (and which is saying a lot). The panels and layout are much more generic and nowhere as interesting from what I have seen in other Go Nagai titles.

I didn’t hate Cutie Honey but I think I had built it up so much over the years I was expecting great things, which I did not get. It is worth a read to see the origins of a character that has had a lot of evolution in 30 plus years. I was expecting Devilman caliber of work and what I got was interesting fluff. There are a number of different manga series for Cutie Honey that take place after this one. I would really like to check those out someday and see how they compare.
Posted by Brand at 10:25 PM