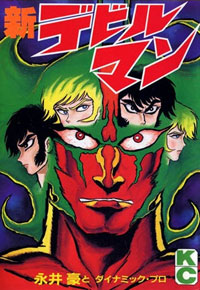 So, this week is another Go Nagai title, Shin Devilman! (It was what I was “feeling” the most this week). So Shin Devilman is like Doctor Who if the Doctor and his companion where both male, and kind of gay. Say, if Captain Jack and Ten went on adventures without any female companions (I know there are fan girls shipping that!). Also if everything that went wrong in history was because of demons instead of aliens.

This is a odd-ball volume from all angles. First of all this came out after the original Devilman was done, so you would think it to be a sequel. But no, it is a story that gets retconned (long before there was even a term for it) into the original series. Oddly, though this volume would not only ruin the pacing in the original but also the ending. This title really kind of awkward and where I thought the original Devilman series was kind of a pulp masterpiece this is just kind of crap. Really amusing crap, but crap none the less. 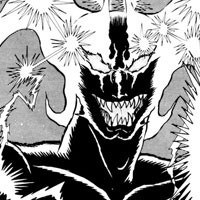 Akria and Ryo manage to some how to travel back in time (really it's not explained) it just happens. Each chapter focuses on someone famous from a different time period. In one it's a young Hitler; another it's Joan of Arc on trial by demons; and in yet another it's George Armstrong Custer just being a bastard. There is a chapter devoted to Versailles and Marie Antoinette which seems like it must have been done only because Rose of Versailles was popular at the time. This title is almost like those PSA's at the end of G.I. Joe. We showed you something violent so here is something educational to make up for it!

As I mentioned this volume is pretty...uh gay. I love my yaoi but Devilman is not where I am expecting any “extra special” boy bonding. It never goes “there” but there are a few scenes which have the boys in oddly suggestive positions. If this were done today I would say it was done for utter fan girl fodder. This is from the 70's though, so I am left really scratching my head. I know part of this volume is to have a chance to expand the boys friendship and have them bond more. (In the original series you don't know all the much about their friendship before story starts.) Expanding their friendship would ideally give the ending more impact, but really it just makes this volume oddly uncomfortable. 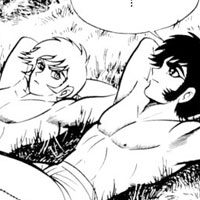 The art is on par with the original Devilman so if you hated that, you are going to hate this also. Everyone is still drawn very awkwardly in typical Go Nagai fashion (which I kind of love). I think it has a lot of great and well design page layouts with panels that are very dynamic and more avant-garde then you see in titles today.

This is such a peculiar title, it's like a good bad movie. You know what you are watching is bad but you can't help but be entertained by it. As with anything Go Nagai it isn't for everyone but if you like his stuff it is worth checking out.
Posted by Brand at 10:16 PM