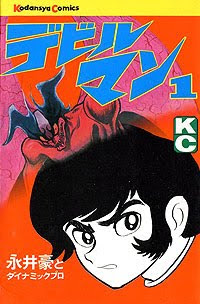 Somehow up until this point I haven't written anything about Go Nagai. I must rectify this issue. If you don't know who Go Nagai he is a mangaka known for Getter Robo, Cutie Honey, Mazinger Z, and a ton of other titles including today's Deviman. He is also responsible for a lot of violence and boobies in anime an manga.

Devilman is considered one of his really enduring classic titles. There have been several anime adaptations, a (terrible) live-action movie, even his own re-imagining in Devilman Lady (which somehow went on way longer then the original Devilman manga did). Devilman is a pretty simple story that is wonderfully creepy and cracktastic at the same time. It's also full of important moral lessons and WTF?! plot twists.

Our hero is Akria a normal dude who is kind of a pussy so much so that when he and his pseudo-girlfriend Miki are corner by bullies all he tries to do is walk away. Miki ends up getting in a fight with them! Only they get a hold of her with the intent to rape her! Akria poorly tries to talk his way out of it but it isn't until his friend Ryo shows up with a shotgun do the bullies leave. 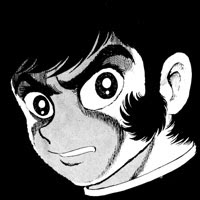 Then Ryo briskly rushes off with Akria to his home telling him his life maybe in danger and that his father has been taken over by demons. Ryo then tells him about an ancient and frighting race of demons that have come back from pre-history to destroy humanity. Only one thing can stop it, Devilman! A man and a demon combined but still retaining the human heart. Ryo chooses Akria for this, but of course Akria refuses being a chicken. It is only after they are attacked by demons that Akria goes for it and apparently the only way to do this is to have an orgy?! Sure, why not. During which most of the participants get killed and Akria joins with a demon to become Devilman (and much less of a pussy, for realz).

From here the story takes a lot of interesting twist and turns as demons start to outright attack humanity and we fine there are others who ended up like Akria as Devilmen. It also has a twist ended that could give CLAMP and M. Knight Shyamalan explosive diarrhea. Honestly I can't decide if the twist ending is genius or terribly stupid. I do remember it getting an audible reaction out of me though, which I give any manga points for.

Now, I really love the art in this title. I did from the first moment I saw it. For most though the super seventies, and really wonky human forms are going to be a turn off. Someone once described Go Nagai's art like fan art, which I can see. It has a very rough sketchy line look, plus all the humans have really odd proportions that just don't seem right. For those who give it a chance though, it can really grow on you, and has a lot of charm. 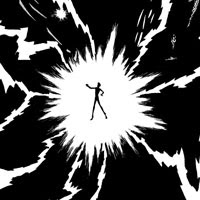 What I do think is great about the art in Devilman (even over a lot of other Go Nagai titles) is the panel work. It's fucking fabulous and moody. When everyday things are going on the panels are very normal. When stranger and weirder things go on the panels getting stranger and weirder. Lots of black negative space is used, extreme close ups of eyes (ha, take that Lost!), and really cinematic spreads. In terms of layout and panel design this is one of my favorite titles. I think it does a really interesting job.

Overall Devilman is a really interesting title for several reasons, as a very influence title that is still popular in Japan today, as one of great works of Go Nagai, as a title that deals with moral dilemmas as an integral part of the plot, and it is a damn fun title to read. My advice, give it a try, it's a fun ride.
Posted by Brand at 11:43 PM