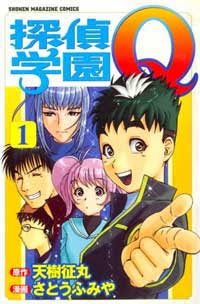 Okay, I am all moved, though I still have a ton of boxes to unpack.  Which like 90% of them are manga.  I was hoping in the new place I'd be able to fit in more book shelves. I under estimated just how much furniture I have though (also baseboard heating is a cock blocker).  Doh!  Anyone need a microwave cart?  Maybe I can fit a bookshelf in the pantry...

This week's title is in one of my favorite genres, mystery.  It is something I didn't realize I liked so much until a few years ago when I watched the Agatha Christie anime. I was then like hot damn, now that I think about it I really like mystery.  When it comes to mystery and manga/anime it tends to be a lot of teen boys, closed room, and being trapped on islands.  There is a lot of precedents for this, Yoshihiro Tatsumi (A Drifting Life) was doing a lot of mystery one-shots,  in the 1950's, of this type before getting gekiga rolling.  It can get a bit old but in short bursts I find this style of mystery wonderfully enjoyable. I could wax on more about Japan and mystery manga (I ran a mystery manga panel at Otakon and Anime Boston one year...) but I'll stop and talk about this week's title. 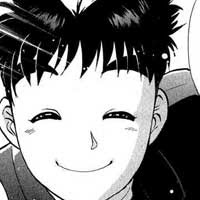 Which is Tantei Gakuen Q (Detective Academy Q) by Seimaru Amagi and Fumiya Satou.  It is one of these formulaic mystery manga like Detective Conan or Kindaichi Case Files.  Though it has a bit of a twist, it's about a group of students going to detective school.  Not just any group but the top class at Dan Detective School known as class Q.  It is kind of like Scooby-doo without the dog and every one has even more of shtick.  Lets's see... super computer geek?  Check! A guy who is a martial artist and has good intuition? Check! The mysterious guy who is up to something? Check!  A cute girl with a photographic memory? Check! And a main character who is just good at everything but seems like a total dope?  Oh so check!  They never really are more then the shtick but they still comprise a fun group of characters and their strengths and weaknesses are played into the plot pretty well.  It being more about a group of people rather then a single person helps to mix it up a bit and helps build a story where a bunch of different tactics are used to solve a case. The school angle is also played in with a rivalry with another class and working to keep their spots in class Q.  It is a nice added element that helps break of the monotony that some of these titles fall into.

Titles like Conan, Kindaichi, even Murder She Wrote fall into an annoying mystery trap them selves. Who would want to meet these people?  Wherever they show up people die!  Poor Jessica Fletcher imagine all the death she must have seen her lifetime!  With Tantei Gakuen Q being a detective class it gives them a legit reason to investigate a murder, often there isn't even a murder!  Amazing!  It might just be a set up for a class test or they might just be studying a closed room crime or such.  They manage to mix up the different story arcs pretty well, which helps to keep it fresh. 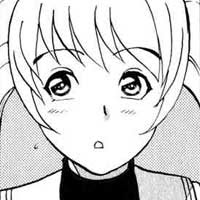 The art is very anime esque, strong lines, and not to much screen tone.  It's a pleasant enough style but I don't think it will wow anyone but it is surly more well drawn then a lot of stuff out there.  Interestingly the artist Fumiya Satou is the same artist for  Kindaichi Case Files.  If you have read Kindaichi it looks almost the hundred percent the same. (Those would be two titles that would make for a good cross over).

This isn't a title that will win over new converts to the mystery genre but if you already like Kindaichi, Conan, or even  Agatha Christie it's worth a look at.  Two interesting tidbits:  The first is when my friend was living in Japan a few years ago he said the anime adaptation of this was airing and that it was huge.  It was everywhere and the middle school kids he was teaching were talking about it all the time.  The second is that apparently Seimaru Amagi  is the pen name of Yuya Aoki who wrote Get Backers.  Uh, WTF?!...Brainsplosion!
Posted by Brand at 9:27 PM