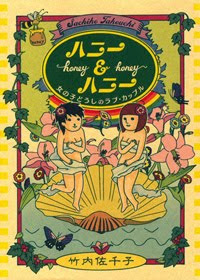 Scanlation Get! is going to be topic I will try and update every week. Where I will suggest a scanlation only (at least at the time I suggest it) manga you may have not heard of.

This week is Honey & Honey which could be best described as a realistic look at lesbian life in Japan with some of the most unrealistic and cute art you could see. It is made up of short slice of life stories about a lesbian couple Sachiko and Masako. You see things like how they meet at an all female mixer after being dumped, and hanging out with mixed friends gay, straight, and transsexual. It's an interesting peak at lesbian life in general but also an inside look of what being gay in Japan is really like versus what we see in manga and anime all the time. This is no girls crying out Onee-sama in an all-girls school in this story. 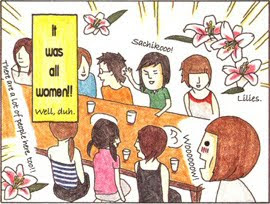 The art in this can be off putting to some. Though I found the art very cute myself. All of it is done in a style that looks like maybe a good at drawing ten to twelve year old did and colored in crayon. I think it adds a nice touch of sweetness to the stories.

Highly recommended for anyone who likes true to life slice of life stories.
Posted by Brand at 10:40 PM