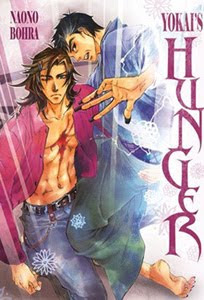 I’ve read so much yaoi in fact that I don’t like a vast quantity of it anymore because the basic yaoi story is just done to death. Take one guy who is masculine by manga shoujo standards and one guy who could be a 14 year old girl with short hair and put them together and angst ensues (ah, if only it could be wacky hijinks). As I’ve gotten older I’ve found this less and less appealing. I like manga that both characters look like adult men (OMG I can’t believe it either!), and have some semblance of a plot. I’m not expecting an epic here but just something more to the story then boy-a meets boy-b angst and butt sex ensues. 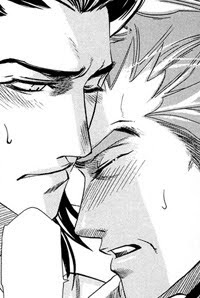 Now you know more about me then you probably wanted to know, but I just wanted to give some perspective when it comes to reading my reviews on this subject. Isn’t it tasty? So, who is this fabled favorite yaoi author? It’s Naono Bohra.

Now that you heard me blather on about yaoi manga for way to long, here is actual review. Yokai’s Hunger is about a young man name Norito just finishing high school living alone and working as a part-time waiter to survive. Norito has lived a pretty solitary life, why you ask? It seems whenever someone gets close to him, bad things happen to them. Well, as we know since this is a yaoi manga that can’t last long, and one day he runs into a middle aged man called Koma, who turns out to be some sort of demon. Norito is then informed that he and Koma where lovers in a past life and are tied together by a "Sigil Oath". This oath has caused a blood mark on Norito’s chest which causing demons to look for the source of power coming from it. Koma then informs him he no longer has to worry though since he is there to take care of him from now on. Wacky hijinks then ensue! No really! They do! There is a bit of angst here and here but never does the story dwell on it like a lot of yaoi manga does. 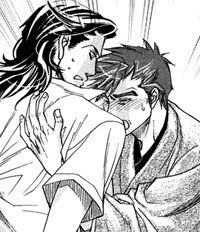 Later we get meet some of Koma’s brothers who come to stay with Norito and Koma. There seems to be some in fighting in the family, causing some tension. We start getting into some back ground on the family and how they once fought God. This is where the story gets a bit to muddled for its own good. None of this is explained all that well and ends up being a bit confusing. This ends up being the weakest part of this manga. The strong points I think are a lot of the cute “family” parts at Noritos home where they have some cute hijinks, and get to see the sweet relationship between Norito and Koma. 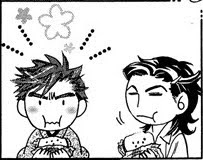 The art in this book is terrific, it may not be everyone’s cup of tea, but it is very well drawn from a technical stand point. While the manga still has some “yaoi proportions” (being incredibly lanky and extra long limbs and fingers), but not nearly as over the top as a lot of other titles in this genre. Also of note all the men in this look like men by anime standards, as in no one familiar with anime would think anyone who wasn’t a girl is a girl. What will freak a lot of people out is her biseinen. She draws a lot of very good looking older men, who look like they are in their late 40’s or 50’s. For those who have a hard time with this thought, just think of bishonen all grown up. I also like her style because it has a lot of strong distinct lines and not wispy like a lot of yaoi and shoujo art tends to be. Her paneling is nice; I’d say better then average but isn’t at the point where it wows me.

Over all this is a great little one volume manga that exceeds in art, and having delightful characters, but gets a little to murky with the story losing some of the momentum it had. Over all I do recommend it to anyone who like yaoi manga and are not freaked out by biseinen. I do hope that some of other works like Three Wolves Mountain, come out in the U.S. I would love to own a copy I could read.

Final Verdict: Be Beautiful
Posted by Brand at 11:16 PM

I love Naono stories and style too.
I got tired read yaoi with cute young little uke and tall, handsome seme. I think I become fetish with adult man with cute appear.
I read almost her work I foind in internet.

I glad we have same taste, lol