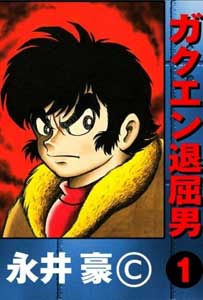 At one point in time there was basically almost no Go Nagai manga in English.  Through the hard work of a lot of scanlators it seems like a mountain of his work is now available. Considering that the likelihood of his work actually getting published in U.S. is low, I really appreciate their efforts.  At first it was jut the big stuff but now we are seeing more and more of his lesser known works like today's title Guerrilla High.

In the late 1960s there was a rise of violent student movements in Universities.  This trickled down even to the lowest kindergarten class.  To a point where no teacher was safe. It was then decided teachers could carry weapons and even have a license to kill.  The students more oppressed then ever start guerrilla movements to bring down this tyranny. Only it seems the guerrilla's themselves are vicious maniacs.

Are heroes (anti-heroes?!) are Saotome Mondo and Midou Tatsuma.  At first it seems they really want to help the students but in truth Mondo just wants to incite violence and murder.  He ends up indirectly killing many of the students on his rampage through the school.  Midou seems like the reasonable one but when it comes down to it Midou can go off the edge just as bad. 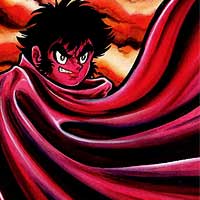 The first volume ends with Midou just disappearing. The second volume introduces us to a new character Nishikiori Tsubasa.  The leader of an all female guerrilla group that goes around in bikinis and go go boots.  She is super strong and not afraid to fight sadly even though she seems like a pretty cool female character she ends up just being most a plot device (also she spends much of the second and third volumes with no pants or underwear on).  As she gets kidnapped and captured by our new villain Midoro Toranosuke, bandaged man, and Principal of an elite school.

At this point I guess his evil plan is to have Mondo rescue her?!  I'm not sure Mondo has no connection to her at this point and going goes to rescue her because she is hot and has nice boobs.  Truly, we stand at the peak of truly great motivation in stories.

After this point I don't want to say to much about the plot. The second half is full of strange twists and I wouldn't want to ruin them.  Though I will have to say this story just kind of ends on a "eh, what?" note.  A bunch of stuff happen and then then go for what seems to be the final fight. Only it's "The End" and not an actual final fight. 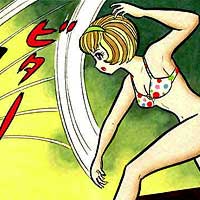 Other then the ending kind of leaving a bad taste in my mouth I enjoy this manga lot.  It runs at breakneck speed.  Something is always happening and there are tons of great fight scenes.  This is one of Go Nagai's hyper violent titles.  Whole mobs of people die in this.  While Nishikiori runs around with out much on there isn't nearly as much on the sex side.  It is certainly far more subdued then Cutey Honey in that aspect.

I want to say the plot is a mess (which it kind of it) but to me the big problem was Saotome Mondo's character.  Was he supposed to be a guerrilla for the people, a redemptionless murderer, someone who at least cares about his friends, or someone who cares about no one?  The character was kind of all over the place. Though, even with those problems it was still a really fun read. 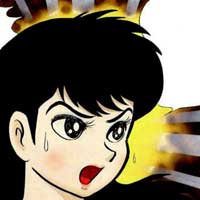 The art in this is actually very nice.  I mean if you already don't like Go Nagai art, this isn't going to change your mind.  But this is some of the best I've seen from him.  Nothing to wacky or wonky looking.  Strong lines, some really great one page spreads, in that really scribblely style he does.  Also of note, huge chunks of this manga are in color.  Not just a page here or there but like 20 pages at a time or more.  For a color comic from the 1970s it is really nice color.  Much better then most American comics comparable in age.  It really makes me wish the whole manga was in color.

If you are looking for something over the top and don't want to think to hard, this is certainly a great red.  Guerrilla High even though it has problems was still a very fun read worth checking out.
Posted by Brand at 12:44 PM