Thoughts: What is going on here? 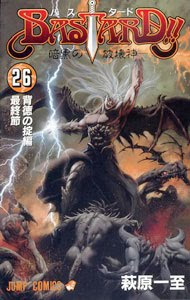 Ugh, I am a bit annoyed. It seems Viz has listed volume 19 at the final volume of Bastard!!. Much like cake, this is a lie. Considering it is still publishing in Japan and is up to volume 26. This is a series have been collecting since 2003. (Holy, crap seven freaking years). My volumes are from so long ago that my first five volumes are in the large size Viz used to publish in (though it seems they have returned to this size for some of their signature line). It is even more annoying that recently Viz stated they would not be canceling any of their product lines. Volume 19 doesn’t even come to any conclusion.

I hope Viz hasn’t really canceled Bastard!! Even a really long delay between volumes would be better. (Though they have been close to a year apart recently). I want to give people my money for this title in a format I can read. Really!

While I don’t know any numbers, Bastard!! always did well at the comic book store I worked at. It wasn't a Naruto or One Piece but I thought it sold pretty solidly. Though said store was in a very middle class white suburb that grew up on heavy metal. Maybe some marketing in some metal mags would work for it... I just don’t want to see it go.

It's seems that few other titles from Viz have gone on a long hiatus or have stopped completely, like Oishinbo. Hopefully some new will come out of Viz. I'd rather know for sure what is going on.
Posted by Brand at 10:03 PM

I wouldn't worry about, since they haven't said anything official.

Wouldn't having Final Volume on their website be something offical?

Huh, they do. I always have the hardest time noticing obvious things.

Have you tried emailing Viz about this?

Too many American manga companies are canceling their work. I have a mountain of manga (read: far too many volumes) and haven't bought more than 2 volumes in the past year because they've canceled everything. (Except Naruto, Bleach, and other crap like that...)

I contacted Viz and they said at least for now that yes Bastard!! is gone.