Another con, another haul.  Otakon this year was interesting for me, it was the first year I did two costumes and the one that I went to least amount of panels. Also it was freaking hot. 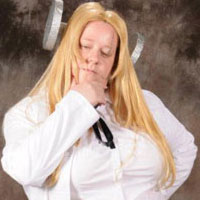 Friday I was dressed as the titular Franken Fran.  Which was interesting to say the least. As a manga only character I didn't expect a ton of people to know me (though at least a few people did).  What I didn't think of, was that most people would think I was dressed as female Stein from Soul Eater.  (Which is kind of funny because after I made my head bolts I made the Stein screw for one of my friends.) The costume was much hotter then I expected.  With the long wig and lab coat I had to stop shopping at one point in the dealers room.  I'm not sure if it was just the heat or if I was having hot flashes (I have some hormonal problems).  I still got a pretty good haul despite all this. 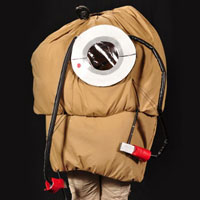 Saturday was interesting to say the least... I don't think I did much other then wear my costume and do a little shopping.  My friends like to get pictures in the Otakon Photo Suite early in the morning but things got all screwed up. I got in my Glados Potato costume later then I had planned but I figured it would be fine because we would be starting late.  Ugh, no so instead of 12 pm we did the shoot at around 5:30.  I was in the costume in the early after noon but after a couple of hours of wearing it I just couldn't do it any more and deposited in a friend's room in the Hilton for a bit.  I then did some more dealer's room and artist's alley shopping.  Which when much better, I was less hot and I felt like people were being way less pushy then on Friday.  I went and retrieved my costume but getting anywhere in it was a challenge.  I had a porthole view but it was so low I could only really see the chest area on people.  I tried going down and escalator and never before had I been so scared to try.  Luckily, a guy talked me through it.  Then I found out the Hilton skywalk bridge was closed (for what reason I guess I'll never know) so I had to go outside again.  Once that costume gets hot, it stays hot.  Even with a fan inside, it was like being in a mobile sweat lodge.  I did finally get my photos taken but I had to get out of the costume a.s.a.p. after that.  My legs are still sore from it.

On one hand I never want to wear this freaking this costume again but on the other had I'd like to try again and do it better.  It wasn't as last minute as the Fran costume but it was still done under a month.  My friend did the wire frame, batting, stuffing, and fabric.  I did the wires, clips, and face plate.  I guess we will see, for a winter convention I don't think it would be so bad heat wise.  Though we would have to figure out how to set the porthole so I can see faces instead of chests.

Sunday was the only day I went to a panel that wasn't my own.  I went to the Vertical panel, which I try to go to every year.  They are publishing some interesting stuff this year, Wolfsmund looks pretty cool and some how they ended up with the job of printing Queen's Blade art books (even Ed didn't seem to enthused by this).  Also Twin Spica is going out of print because of poor sales which is pretty sad, Ed quoted numbers and it was abysmal.  Remember if you really want a title to come out here buy it!

I ran two panels myself.  Both of them were 18+ this time around.  I did a Go Nagai panel, which was a rehash from last year but with more 18+ content.  Last year I managed to be informative this year I managed to wave my hands around a lot and spout stuff.  I tried, but it just wasn't with me this time.  It didn't help we ran into technical difficulties. My netbook only has HDMI out so I told my co-panelist to bring his laptop (we used his last year).  There is where we ran into a problem it was a different laptop but only had HDMI out also.  Fuuuuuuuuuuuu... Luckily the con staffer  and the audio guy called for a HDMI converter and I call my friend for her laptop.  Of course pretty much everything comes at once.  I tell my friend we don't need her laptop and she leaves.  Only my co-panelist's computer won't duplicate the screen.  Fuuuuuuuuuuuuuu.... I call my friend again and she runs down her laptop, again.  Fortunately we got there early enough that we were only 5 minutes late to start. It went pretty well, we had some laughter and we didn't have any one really get up to leave (which is always a good thing).

Saturday said laptop friend, another friend, and I ran a yaoi panel called Sugar & Old Spice.  Two of us had previously done it at MangaNext.  Only at MangaNext it was the same time as the rave and so only three people who really loved yaoi showed up.  Otakon we packed a room (a small room but still a room).  My friends were very prepared but I was not so much.  I knew the stuff because it is stuff I am very familiar with but I should have had notes.  Still we filled the time pretty well and had people asking us all kinds of questions.  It was cool.

As for the actual haul it was:

Some of the manga came from a friend who got it at a local store to her for super cheap.

Over all a weird but interesting year.
Posted by Brand at 12:16 AM

Very interesting information!It was what I was after. That's perfect!

I wanted to thank you ffor this very good read!! I definitely enjoyed
every bit of it. I have got you book-marked to look at new thinggs you post
writing business plan services 토토사이트

This piece of writing is in fact a nice one it assists new web viewers, who are wishing for blogging. 경마사이트

Great bloog here! Also your website loads up very fast! What web host are you using? Can I get your affiliate link to your host? I wih my website loaded up as quickly as yours 카지노

Greate article. Keep writing such kind of information on your page.
Im really impressed by your blog. 토토