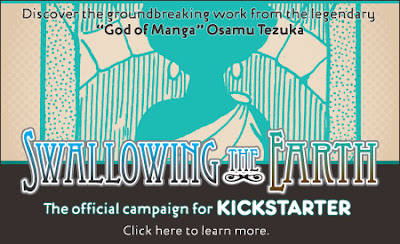 According to their website, manga publisher DMP has started a campaign via Kickstarter in order to be able to reprint Osamu Tezuka's "Swallowing the Earth".

Over two years ago, DMP sold "Swallowing the Earth" as a large omnibus. However, it had a small print run and has been in high demand by fans ever since. DMP wishes to print the book again but cannot afford a new print run. They have turned to the fundraising site Kickstarter to get the book back out to fans.

With Kickstarter, users pledge money to the campaign over a 30 day period. If the goal is met by the end of the 30 days, then the project is funded. By pledging different amounts, users can gain different rewards. Awards include a copy of the book when it's printed or even a package that not only includes the book, but many other manga titles as well.

DMP stated that if the campaign is successful, they will be looking to reprint other titles, or even bring new titles this way in the future.

*Note* This was my news story on myanimelist.net

I actually own a copy of the book from the first time DMP printed it. It's an interesting piece. It's certainly not Tezuka's best work, but is a very interesting transitional piece. During the gekiga movement in the 1960's Tezuka wanted to start writing more mature works. The thing is there a few transitional works where you can tell he is trying to write a more mature story but still feel really cartoony. Silly faces, over exaggerated gags, and such. But the story tends to be dark and the characters often have poor morals. It can be really odd. So, it's interesting to see Swallowing the Earth compared to something a few years later like MW (which is one of his most serious and dark titles).

DMP also even mentions that if this goes well they will look into publishing niche titles this way. I could think of so many great titles I could get this way. I hope it all works out.
Posted by Brand at 4:38 PM

Thanks for the post! I'm Ben Applegate, running the Kickstarter program for DMP. I'd be really interested in hearing which niche titles you'd like to see this approach applied to, so e-mail me at ben@emanga.com if you have the time.